It’s been a busy place in the world of Road Traffic Law Act 1988 over the last few years with several significant changes and tweaks to our laws. 2015 in particular will see 5 changes that will now really start to have an impact upon motorists.

Rather than go off trawling the internet to bring yourself up to speed, you can read my helpful summary!

Drink Driving Laws in Scotland
One of the biggest (and most talked about) changes has been to the drink driving laws in Scotland which came into force towards the end of 2014. Scotland now has the lowest drink driving limit than anywhere else in the UK after it was reduced from 80 mg in every 100 mls of blood to 50 mg. This move by Scotland has prompted many to wonder whether England & Wales will follow suit and it seems only a matter of time before we do.

Farwell to the Tax Disc
This is another change that came into force in the latter half of 2014 however this is the first year that it will actually be relevant for many motorists. Motorists are no longer required to display a tax disc as the DVLA will hold a record of all vehicles on their computer system. This doesn’t mean you can stop paying for tax mind….

And Farewell to the Paper Counterpart 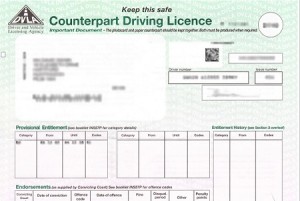 In a bid to move towards a totally digital era, the paper counterpart has followed gone the same way as the tax disc and is now no longer valid as of 08 June 2015. If convicted of an offence, your paper licence will no longer be endorsed as the DVLA will hold a digital record of all penalty points and convictions and this information will be supplied to the Court when necessary. The DVLA have advised however that paper licences issued before 1998 will still be valid and should not be destroyed and it would actually be a good idea to read this article before you chuck out your counterpart even if issued after ’98.

Drug Driving Finally into Effect
Talks of drug driving legislation were going around for a few years but the changes finally came into force earlier this year in March. Whereas the old legislation of “driving whilst unfit through drink or drugs” proved problematic for the Crown Prosecution Service, the new offence of drug driving establishes clearly defined limits for a whole range of common medicines and enforces zero tolerance for any   illegal drugs whether your driving is impaired or not. The limits set mainly relate to prescription medication that is sometimes abused so if you do take any medicines make sure to check with your doctor and thoroughly read the label.

Crackdown on Smoking in Cars (but only with children)
As of 01 October 2015 it will be illegal to smoke in a vehicle whilst a child is with you. The new law is actually going to be part of the existing smoke-free laws set out in The Health Act 2006 as opposed to driving legislation and it will mean that motorists who ignore the regulations could be hit with a £50 fixed penalty. It also makes it an offence to prevent others from smoking in your car with children present.

So there you have it….the 5 most important changes to motorists in a nutshell!