The majority of drink and drug driving allegations are defended on legal technical grounds borne from strategies that are unique to road traffic specialists. Some firms claim that there are some strategies that only they deploy however this is very rarely the case unless being compared with a non-specialist lawyer.

That said, there are some occasions where a defendant has a more factual defence as opposed to relying on technicalities and flaws in the Prosecution’s case against them and this is known as the “Hipflask defence”.

It is not a defence that comes up very often however it is one which often yields successful results.

What is a Hipflask Defence?

Drink driving is defined by section 5(1)(a) of the Road Traffic Act1988 which states that it is an offence:

(a)drives or attempts to drive a motor vehicle on a road or other public place, or

(b)is in charge of a motor vehicle on a road or other public place,

after consuming so much alcohol that the proportion of it in his breath, blood or urine exceeds the prescribed limit he is guilty of an offence.

The key elements of the offence have been highlighted above. In a nutshell, a hipflask defence is one that arises when a defendant has consumed alcohol after having driven their vehicle but before being stopped or breathalysed by police. This then calls into question whether or not the essential elements of the offence can be proven by the Prosecution. If a person consumed alcohol after having already driven their car, how can the court be sure that they were over the prescribed limit at the time they did?

If you are struggling to imagine the circumstances then allow me to provide an example which also sheds light onto the origin of the defence’s name.

Historically, it was quite common for people to carry a hipflask with alcohol in it and the phrase was coined to help explain the nature of the defence. If a motorist was involved in an accident and then took a swig from his/her hipflask immediately afterwards to help calm their nerves and was then breathalysed to be found as over the limit- a potential hipflask defence would arise. Was the motorist only over the limit because of the alcohol he consumed after having crashed his car (which he did whilst completely sober)? This is the question that must be answered as in order for the offence to be committed, the driver must be over the limit at the time of driving.

This is what a lawyer means when they refer to the “hipflask defence”- the fact that alcohol was consumed after the incident..

During the 1990’s, the Hipflask Defence became common and it was in fact the defence raised in over 90% of Swedish appeal cases against drunk driving convictions. In earlier years, it may have been difficult for the Prosecution to prove that a person was already over the limit and this doubt should result in defendants being found not guilty. The advances in science have made this a little easier however it is by no means infallible.

Courts understandably became suspicious of these defences which were seemingly an easy escape route from a drink driving allegation and more rigorous tests began to be applied. It is usually the Prosecution’s job to prove that a defendant is guilty of an offence beyond reasonable doubt however this is not the case when a hipflask defence is raised. In these circumstances it is for the defence to prove that “on the balance of probabilities” that at the time of driving, your alcohol level would have been below the legal limit.

There is a presumption provided to the courts by section 15(2) of the Road Traffic Offenders Act 1988 that that the amount of alcohol measured in a suspect’s sample (whether it be breath, blood or urine) was not less than the amount of alcohol in their system at the time of driving. If however, the defence can prove that the level found by the police was only achieved by drinking the volume if alcohol claimed to have been consumed after the incident, then this presumption is rebutted.

How Do We Prepare a Hipflask Defence?

Whilst this is a factual defence, the preparation required is similar to that of a technical defence and it is almost essential that evidence from a forensic toxicologist is presented by the defence. The necessity of forensic evidence became relevant after Pugsley v Hunter [1973] R.T.R 284 which established the principle. Unless it is obvious that the defendant’s post incident consumption of alcohol explains the excess, it is up to the defendant to call medical or scientific evidence to prove they would not have been above the prescribed limit.

The toxicologists we instruct at Olliers Motor Law are some of the foremost authorities in the industry and they can conduct calculations to indicate what the expected alcohol level would have been at the time of driving based on your instructions of what you had to drink and when. Ultimately, they calculate whether your stated alcohol consumption accounts for the level found in your system by the police.

There are a range of factors that the expert must take into account during these calculations such as:

Using this information, the expert would prepare a detailed report which can be used as part of the defence case to help demonstrate to the court that at the time of driving the vehicle, you were not in fact over the legal limit.

This report and the evidence is still open to challenge however as the Prosecution can suggest to the court that you have not been truthful in respect of your alcohol consumption. It is therefore always useful if evidence can be provided to support your account (i.e. bar receipts and statements from witnesses).

What to do if Charged

The success rate of Olliers Motor Law speaks for itself and has established us as arguably the leading and most successful specialists in the country. Since being relaunched in 2012 when I joined Olliers the department has accrued an overall trial-success rate of 92%! In cases where a sample of blood or urine has been taken or those where the procedure has taken place in a hospital, our success rate is 100%!

We have forged relationships with the very best expert witnesses and specialist barristers to ensure that your case gets the full spectrum of preparation and attention it requires.

We are regularly able to defence allegations and offer free advice in which we can discuss the options available to you so please do not hesitate to get in touch! 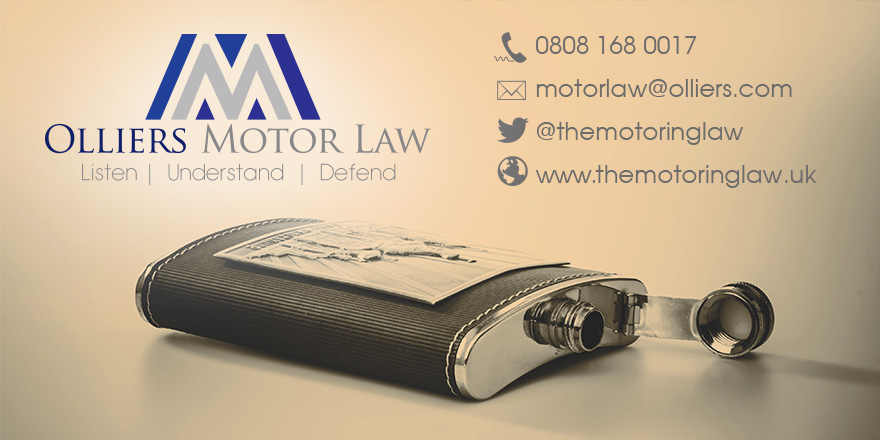